Sri Lanka’s tea cultivators and manufacturers are the custodians of the traditional, orthodox method of black tea production. This is still agreed by most experts to produce the best black tea. Even with the technological improvements introduced over the last thirty or forty years, the orthodox method is relatively slow and labour-intensive; but as the tea planters and traders of Sri Lanka have always maintained, good tea cannot be hurried. Nor, oddly enough, can it be delayed. The time devoted to each of the processes of tea manufacture has to be finely judged if a quality product is to be obtained. This is a matter of the tea-maker’s judgement, for the right timing depends on the moisture content of the plucked leaf, the temperature and humidity conditions prevailing over the period of manufacture and a variety of other factors. Although the process of making fine black tea is simple in its essentials, expertise, experience and a ‘feel’ for the task are absolutely essential to success. 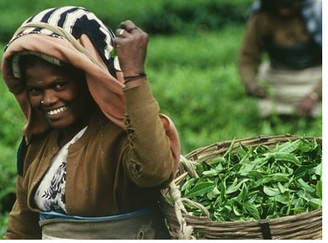 The process of manufacture commences when the leaves are picked or ‘plucked’. Plucking calls for discrimination and dexterity and is carried out mainly by women. Only the uppermost foliage on every stem is picked – the famous ‘two leaves and a bud’ – and the stem itself must be left undamaged. Fiddly work, but a skilled tea-plucker can collect up to 20kg (44lb) of leaf daily
In other parts of the world plucking is done by machines. These machines pluck the bud, the young leaf, a lot of coarse leaf and few twigs as well. Coarse leaf and twigs just add bulk and not flavor to the tea.
​​Weighing​ 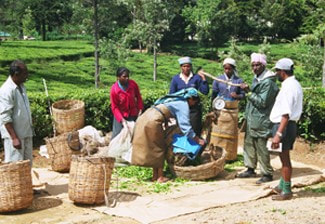 On arrival at the factory, the raw leaf is weighed. The total weight recorded for the day’s batch provides a benchmark for quality assessment at the end of the process of manufacture. After weighing, the tea is laid out for withering.
​
​Withering 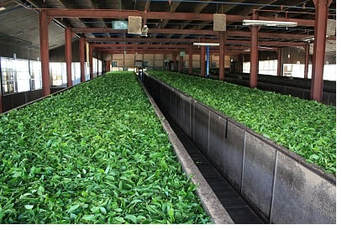 ​Raw leaf is ‘fluffed’ and spread out to dry on racks or troughs in a well lit and ventilated space. It will lie here for 18-24 hours, slowly losing moisture and undergoing physical and natural changes essential to manufacture. Over-withering can be fatal, so the process is carefully monitored. It is complete when about two-thirds of the moisture present in the raw leaf has evaporated. 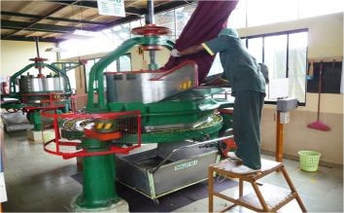 ​The withered leaf is now ready for rolling. This is a mechanized process in which the leaf cells are ruptured to release enzymes and bring them into contact with air so that aeration can commence. The bits of broken and rolled leaf are called dhools. The dhools are then broken up and sifted before aeration.
​
​Aeration 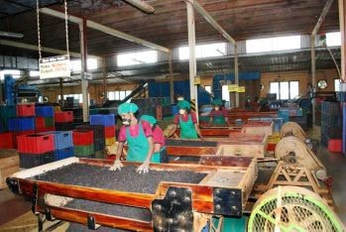 During this critical stage of manufacture, important natural reactions take place through the action of air on the leaf tissue. The rolled, broken leaf is spread out on tables and exposed for a period that varies between 20 minutes and five hours, depending on a variety of factors, including what kind of final product is desired. The withered tea leaf is a rusty, coppery orange colour. Again, timing is critical: under-aerated tea tastes raw and green, over-aerated tea is soft and tasteless. Aeration is also sometimes known as ‘fermentation’ or ‘oxidation’.
​
​Drying 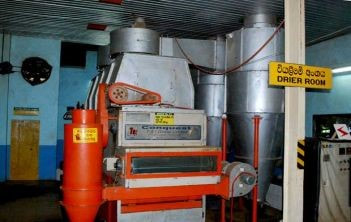 ​When the right amount of aeration has occurred, the leaf is dried in a dessicator or ‘firing chamber’ at 99-104˚C (210-220˚F) to prevent further chemical changes. This shrinks and darkens the leaf, resulting in the product known as black tea. This completes the actual manufacture. 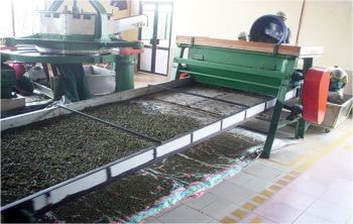 ​The size of the leaf particles in your teapot bears no relation to quality per se, but it does affect the colour and strength of the brew. Manufactured tea is graded by leaf size using a mechanical sifter. ‘Leaf’ grades contain the largest pieces, ‘broken’ grades are successively smaller, while the smallest grades of all are known as ‘dust’. Larger grades tend to command higher auction prices. 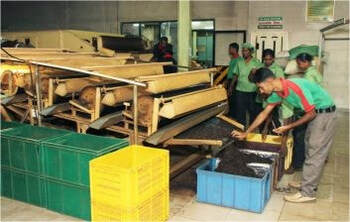 ​The damp tea leaves are then rolled to be formed into wrinkled strips, by hand or using a rolling machine which causes the tea to wrap around itself. This rolling action also causes some of the sap, essential oils, and juices inside the leaves to ooze out, which further enhances the taste of the tea. The strips of tea can then be formed into other shapes, such as being rolled into spirals, kneaded and rolled into pellets, or tied into balls, cones and other elaborate shapes. In many type of oolong, the rolled strips of tea leaf are then rolled to spheres or half spheres and is typically done by placing the damp leaves in large cloth bags, which are then kneaded by hand or machine in a specific manner.